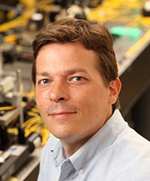 Andreas Beling received the Dipl.-Phys. degree (M.S.) in physics from the University of Bonn, Germany, in 2000 and the Dr.-Ing. degree (Ph.D.) in electrical engineering from Technical University Berlin, Germany, in 2006. He was a staff scientist in the photonics division at the Heinrich-Hertz-Institute in Berlin in 2001-2006, a Research Associate in the Department of Electrical and Computer Engineering at the University of Virginia in 2006-2008, and has two years of industry experience as a project manager working on coherent receivers for high-speed optical systems. He returned to University of Virginia where he currently is an Associate Professor in the Department of Electrical and Computer Engineering.

Andreas Beling’s research interests center on integrated photonic technologies for optical communications, sensing, and microwave photonics. He has authored or co-authored more than 180 technical papers, three book chapters, and four patents. He has served on numerous technical program committees including the Optical Fiber Communication (OFC) Conference (2010-2012), the Integrated Photonics Research, Silicon, and Nano-Photonics (IPR) Conference (2016, 2017), and the Microwave Photonics Conference (2015, 2016), and was a Technical Program Subcommittee Chair at OFC in 2013. From 2014-2019 Dr. Beling was an Associate Editor of the IEEE/OSA Journal of Lightwave Technology. He is a senior member of the OSA and IEEE.