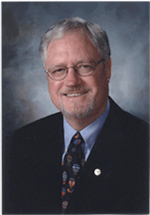 Joe C. Campbell received the B.S. Degree in Physics for the University of Texas at Austin in 1969, and the M.S. and Ph.D. degrees in Physics from the University of Illinois at Urbana-Champaign in 1971 and 1973, respectively. From 1974 to 1976 he was employed by Texas Instruments where he worked on integrated optics. In 1976 he joined the staff of AT&T Bell Laboratories in Holmdel, New Jersey. In the Crawford Hill Laboratory he worked on a variety of optoelectronic devices including semiconductor lasers, optical modulators, waveguide switches, photonic integrated circuits, and photodetectors with emphasis on high-speed avalanche photodiodes for high-bit-rate lightwave systems. In January of 1989 he joined the faculty of the University of Texas at Austin as Professor of Electrical and Computer Engineering and Cockrell Family Regents Chair in Engineering. In January of 2006, Professor Campbell moved to the University of Virginia in Charlottesville as the Lucian Carr Professor of Electrical and Computer Engineering.